By Jonathan Chadwick For Mailonline

A new form of double-layer colored paint designed to cool buildings by reflecting the sun could become an environmentally friendly alternative to air conditioners.

US material scientists say their array of colored multilayer paints can dramatically cool cool sunflower surfaces by up to 28ºF (15.6ºC).

They consist of an upper layer that absorbs light to reach desired shades and a porous underlay that reflects from near to short infrared wavelengths to resist heating.

The porous paints that come in black, blue, red and yellow could cover buildings, cars and data centers and replace energy-intensive air conditioners.

A single coat of paint and the new bilayer paint on a thermal sensor. The bilayer coating (right) stays cooler under sunlight, compared to the single layer, as seen under infrared

Data center servers – hardware that helps process mass data for companies like Facebook and Google – should be kept in cool environments to offset the heat they generate.

This new range of dyes could offer an environmentally friendly way to reduce the power needed to keep them constant.

& # 39; The paintable twin layer designs, which substantially overcome the commercial monolayer paint, demonstrate a practical and efficient solution for cooling colored objects in a green and energy-saving manner, & # 39; said study leader Dr Yijun Chen, at & # 39; the University of Columbia in New York.

& # 39; The performances show that the paint design can achieve both color and efficient radiative cooling in a simple, inexpensive and scalable way. & # 39;

Scientists have previously sought surfaces that reflect sunlight to encourage cooling, but the designs are usually white, which can produce a harmful, retinal-looking sheen. 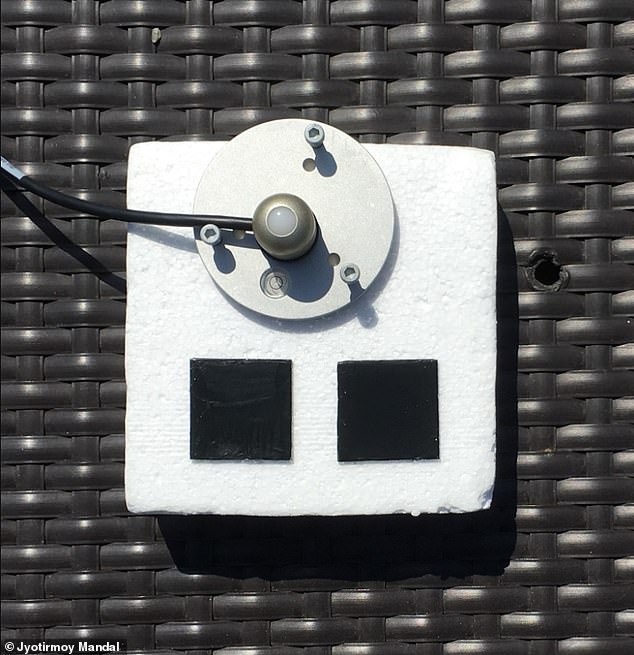 Both the monolayer and twilayer coatings have almost identical colors to the human eye, as shown above

Infrared waves, like infrared light, are part of the electromagnetic spectrum.

The infrared region of the spectrum is divided into near-, mid-, and far-infrared.

However, the human eye cannot see it – instead, humans can detect it as heat.

To overcome this, Dr Chen and colleagues developed a 500-micron thick layer of paint – like half a millimeter.

This ultra-thin layer contains interconnected micro-pores and nanopores that reflect infrared light – a kind of electromagnetic wave that transmits heat.

The top layer of paint that absorbs light contains dyes and TiO2, as titanium dioxide, which is already used to add opacity to commercial paints.

They compared the different colors with traditional one-layer dye, and found that the new technology produced higher reflective values ​​for each color. 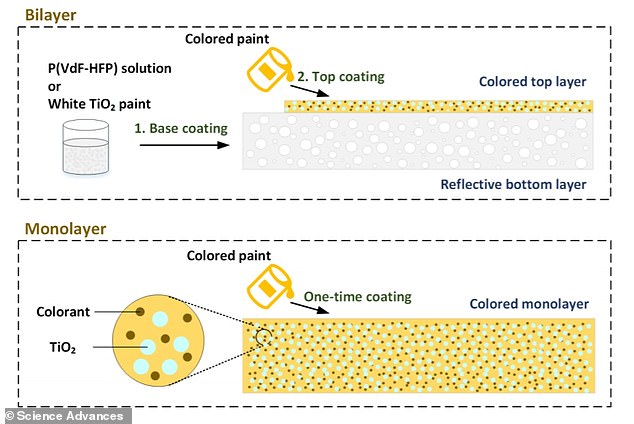 Above, the manufacturing process of & # 39; bilayer coating. The relative surface layer in the new dye reflects strongly close to short infrared wavelengths. Bottom: the fabrication process of a monolayer coating. The monolayer contains dyes and TiO2 – titanium dioxide – which is already used to give opacity to products such as dye, plastic, paper, ink, food and medicine

& # 39; Thus, the bilingual reaches higher reflectance compared to commercial dye monolayers of the same color and stays cooler to three to 15.6 degrees Celsius under strong sunlight. & # 39;

The scientists also managed to achieve different shades of the same color by manipulating the thickness of the top layer. 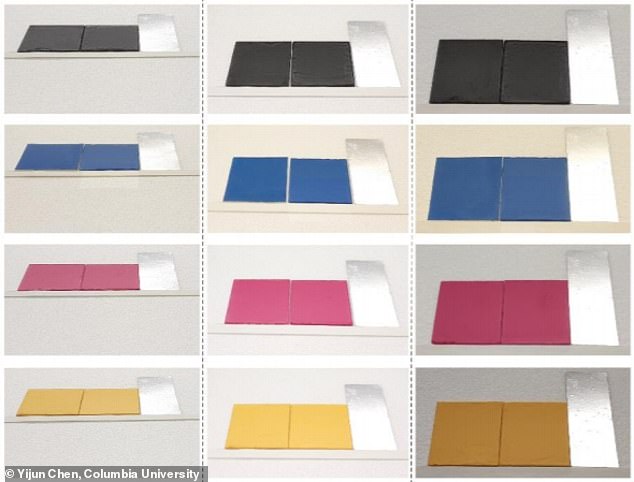 The researchers also tested the technology to make sure it is still performed in extreme heat.

They placed the paint 30 days outside, as in an oven, at 140 degrees Fahrenheit (60 degrees Celsius) and found that the paint still reflected almost as well as at lower temperatures.

The paint, which has yet to be marketed, has been further elaborated in Science Advances.